Emissions-free flight is the vision of MTU and the overall goal of aviation. Both take the 1.5-degree target set out in the Paris Agreement as their focal point. That is why we have further developed our Clean Air Engine technology agenda to provide engines for climate-neutral flight before 2050, and why we are intensifying research into revolutionary propulsion concepts.

To achieve the ambitious climate targets laid out in the Paris Agreement and the EU Green Deal, it is important to consider every way in which aviation affects the climate.

MMTU has been working for a long time on solutions to make flying more environmentally friendly. In the past, targets in the aviation sector mainly concentrated on reducing CO2 emissions, but the Paris Climate Agreement has led to a paradigm shift. According to the Agreement, global warming is to be kept below 1.5 degrees Celsius compared to preindustrial levels. Meanwhile, the EU Green Deal is aiming for a 55% reduction in greenhouse gas emissions by 2030 as an intermediate target, and greenhouse gas neutrality by 2050. To achieve these ambitious targets, it is important to consider every way in which aviation affects the climate because non-CO2 effects play a major role in climate change. In addition, knowledge about how non-CO2 effects work has improved significantly. So besides further reducing fuel consumption and thus CO2 emissions, MTU focuses on reducing contrails, the associated cloud formation and nitrogen oxides (NOx) emissions. More about climate change in our spotlight The reduction of noise and harmful exhaust emissions also remain important goals. The MTU Principles describe how to create products with fewer negative effects on the climate and health; corresponding principles are set out in global MTU Code of Conduct.

The aviation industry is characterized by long product cycles. As a rule, aircraft engines spend up to 30 years in service before they are decommissioned. Goals to produce eco-efficient engines therefore have a long-term perspective and are established in memoranda of understanding by stakeholders (airlines, aviation industry, research, aviation authorities), such as Flightpath 2050, Europe’s vision for the future of aviation. However, as the goals set out in the Paris Agreement are far more ambitious than those of Flightpath 2050, MTU has realigned its Clean Air Engine (Claire) technology agenda. Our declared goal is to bring products to market that enable climate-neutral or emissions-free flight long before 2050. Therefore we are stepping up our research on pioneering propulsion concepts in partnership with players from industry, science and research. To this end, we have set out time horizons, targets and implementation options in Claire, taking into account the three application areas of aviation—short-haul, medium-haul and long-haul.

In addition to the evolutionary further development of the gas turbine engine, we have anchored new, revolutionary propulsion concepts in Claire. MTU engineers favor the water-enhanced turbofan (WET engine). This concept substantially reduces fuel consumption and all emissions that impact the climate—not only CO2, but also NOx and the formation of contrails. Another approach that MTU’s technology development work is taking aims at complete electrification of the powertrain to achieve zero emissions. We see the greatest potential in converting hydrogen into electricity with the help of a flying fuel cell (FFC).

We support the use of sustainable aviation fuels

Sustainable aviation fuel (SAF) will play a major role in efforts to achieve climate neutrality. SAFs can already be used in admixtures of up to 50% as a “drop-in” fuel—i.e., without the need to adapt the aircraft or engine. Tapping the full potential of SAFs is an essential part of achieving climate targets. This in turn hinges on immediately increasing production capacity for them significantly. Indeed, according to a study by the International Air Transport Association (IATA), SAFs alone can help reduce CO2 emissions by up to 80%; future advanced manufacturing processes will achieve even higher figures. Flight tests conducted by the German Aerospace Center (DLR) recently demonstrated the potential of SAFs to reduce particulate emissions and thus have a strong positive impact on the formation and effect of contrails. As a founding member of the Aviation Initiative for Renewable Energy in Germany (aireg e.V.)—an association of airlines, manufacturers and research institutes—MTU advocates the introduction of SAFs.

In addition, we are funding several projects to set up SAF production facilities. For example, we are a consortium partner in the Clean Tech for Aviation initiative and support research into near drop-in fuels. These are fuels that can reduce the climate impact even further, but require minor adjustments to the engine and aircraft.

Sustainable aviation fuels in our spotlight
on climate action

The geared turbofan flies: More energy-efficient and with lower emissions than previous engines

With the first generation of the GTF engine family, which we developed together with our partner Pratt & Whitney and continue to manufacture, we have not only achieved but in fact exceeded our first climate target of a 15% reduction in CO2 emissions as described in Claire 1 (16% for the PW1100G-JM that powers the A320neo, for example). This engine family has become a major business success and measurably reduces the burden on the environment: its first generation has already enabled airlines to avoid more than six million metric tons of CO2 in flight. It also brings significant improvements in terms of NOX emissions, which are 50% lower than those of its predecessor. – In service

According to the results of an in-house study, drop-in SAFs, which can already be used today in admixtures of up to 50%, could reduce the climate impact by 35% per passenger kilometer (relative to the technology of a 2000 engine).

In over eleven million flight hours and on more than 1,100 aircraft, the engines of the geared turbofan family have already saved more than six million metric tons of CO2 (source: Pratt & Whitney, as of Q4/2021). The engine is also a commercial success, and is a key driver of revenue in our portfolio. 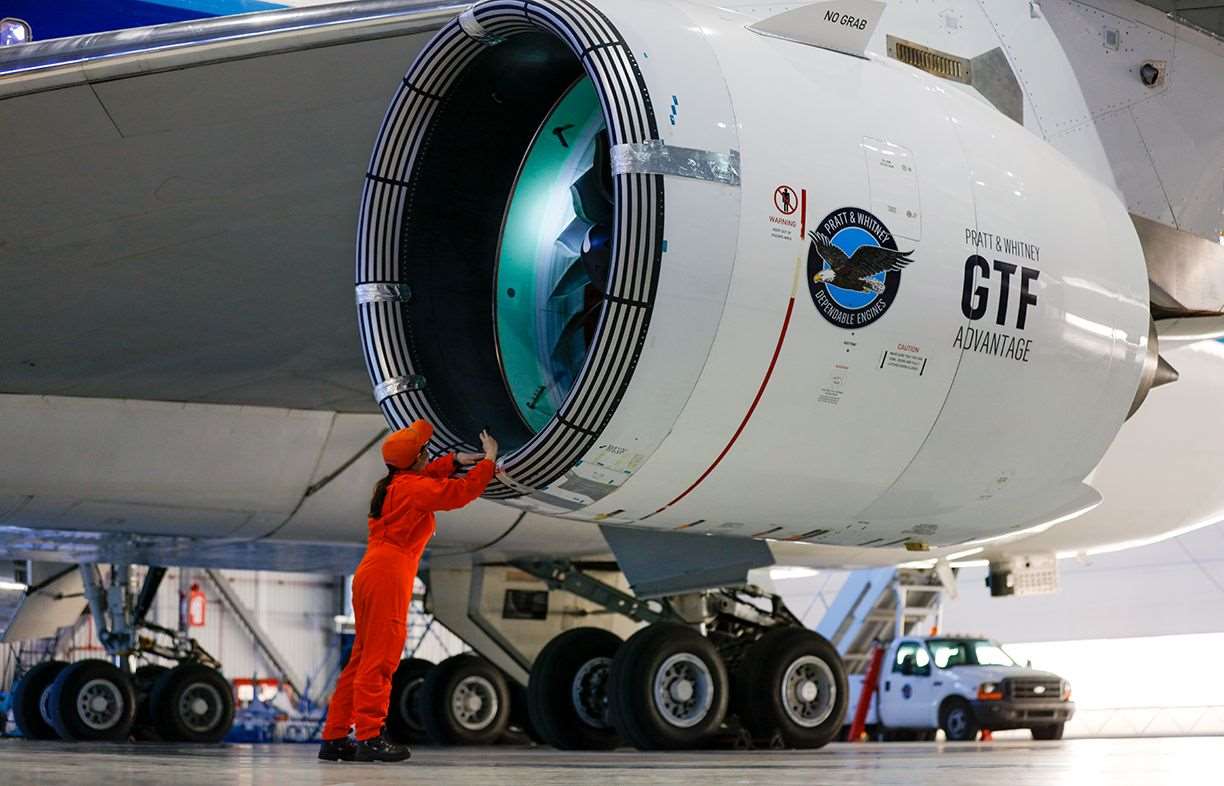 To the press release

Pratt & Whitney is launching a technologically improved geared turbofan (GTF) for the A320neo family: the GTF Advantage™, for which we supply key improvements. The GTF Advantage will cut fuel consumption and CO2 emissions, leading to an overall reduction of 17% in each compared to previous engine generations, and is designed to run on 100% SAF. It can thus achieve a 60% reduction in CO2 per passenger kilometer (relative to the technology of a 2000 engine).

As part of Claire Stage 2, by 2035 we aim to reduce the climate impact of aircraft engines by 60 to 80% per passenger kilometer (relative to the technology of a 2000 engine). MTU’s Claire 2 relies primarily on an improved second-generation geared turbofan that achieves higher overall efficiency primarily through improved component efficiency and more lightweight and temperature-resistant materials. Climate impact can be immediately reduced through the widespread use of SAFs, which do not require any kerosene from fossils fuels (100% SAF) and could be used with the existing infrastructure. A hydrogen-powered geared turbofan would also be an alternative to achieve the climate action target. However, the use of hydrogen requires adapting the infrastructure on a broad scale.

There is also the WET engine, a revolutionary propulsion concept based on the geared turbofan. The first version is scheduled to reach the market in 2035 and achieve virtual climate-neutrality by reducing all emissions that have a negative climate impact. In the same timeframe, an initial version of the flying fuel cell could be operated over shorter distances with virtually zero emissions and so further reduce the climate impact of aviation.

In all projects, it must be taken into account that the evaluation of aviation’s impact on the climate, particularly the formation and effect of contrails, is still the subject of research. Reducing uncertainties in scientific analyses and studies is therefore an important goal for us, which we rigorously pursue together with world-leading research institutes such as DLR.

We are already working on the next stage (Claire 3) in projects with industrial and research partners. These publicly funded projects center on further reducing the climate impact of aviation. The second generation of the geared turbofan with WET engine should be even more efficient overall, allowing a further reduction in energy consumption. Given the limited availability of renewable energies, minimizing energy consumption is an important goal in addition to reducing climate impact. The use of hydrogen in the WET engine should also be possible at the same time. This would not only have advantages in terms of CO2 emissions, but, thanks to the cooling potential of liquid hydrogen, could also facilitate the integration of WET engine technology into the aircraft system.

Use of flying fuel cells in short- and medium-haul operations is an objective of Claire 3. For this purpose, the focus is on a further improvement in the weight-specific performance of the individual components, which simultaneously reduces energy consumption in flight.

Let’s talk about it! Our video series on sustainability@MTU, featuring films on the fuel cell and hydrogen lines in aircraft, is available in our media archive.

How the water-enhanced turbofan works

Based on the gas turbine, the water-enhanced turbofan (WET engine) is a revolutionary propulsion concept that takes full advantage of MTU’s know-how. This concept reduces energy consumption and CO2 emissions by recuperating heat from the exhaust gas stream and feeding it back into the work process. When that heat is added to water, it creates steam, which is then injected into the combustor. As part of the subsequent recovery of this water from the exhaust gas stream, particles are filtered out, which in turn can significantly reduce the formation of contrails. The overall effect is to reduce the climate impact by lowering emissions of CO2 and nitrogen oxides (NOx) and reducing contrail formation and energy consumption. This saves costs and conserves resources.

One very promising emerging technology for sustainable aviation is the hydrogen-powered fuel cell, which emits nothing but water. This flying fuel cell converts liquid hydrogen into electricity, which is then used to power electric motors that generate thrust via a propulsion generator, such as a propeller. This propulsion system does not produce any emissions of CO2, NOx or particulates—the only emission is water, thus making the FFC virtually emissions-free. We are pursuing this concept because of its major potential to reduce climate impact. To that end, we are working with DLR on a flight demonstrator based on a modified Dornier Do228 turboprop aircraft. The demonstrator is due to take off by the middle of the decade. In preparation, we tested an initial model-scale fuel cell unit, including control functions, on our test stand in 2021.

To the press release

MTU has entered into an innovation partnership with the European Aviation Safety Agency (EASA). Together, we are investigating possible ways forward for the future certification of a flying fuel cell (FFC).

To enable passenger aircraft powered by fuel cells to fly, however, different technologies are required—first and foremost, the fueling system and its integration into the aircraft. Hydrogen occupies three to four times more volume than kerosene, even at minus 253 degrees Celsius. As things stand today, implementing this in the short- and medium-haul segments would still make sense. For longer routes, other solutions such as our WET engine are better.